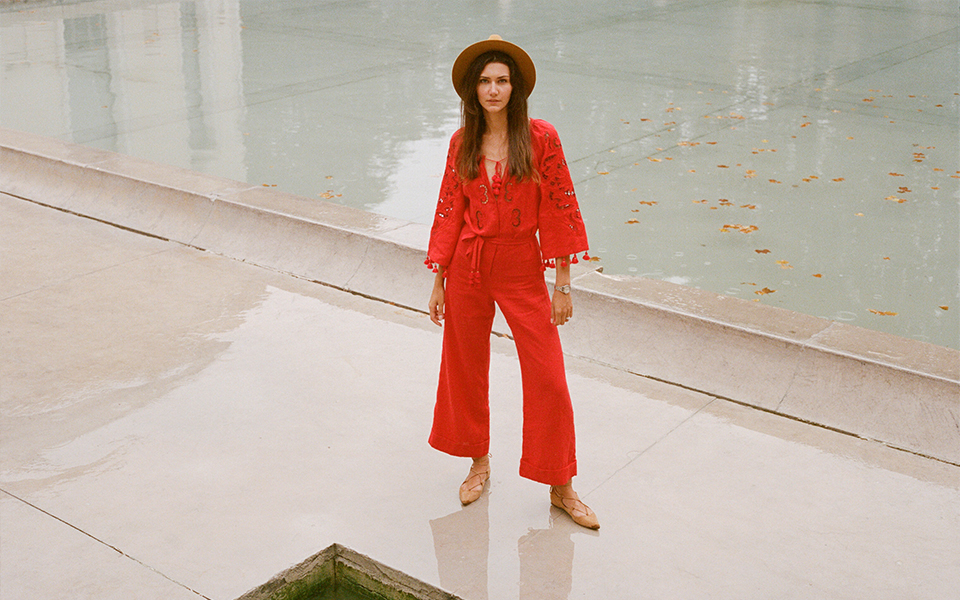 Cool, naturally breathable and sustainable, linen fabric has many attractive properties and all of them are most easily appreciated when wearing one of My Sleeping Gypsy linen dresses. In this article we briefly explore the history of linen, its excellent properties and why we chose it for our garments.

Linen begins life as the flax plant, a pretty true-blue flowering plant, which is harvested in August, 100 days after sowing. Linum usitatissimum is one of the oldest cultivated plants in human history. During centuries people have used linen for many different purposes. For example linen was used as a form of currency in ancient Egypt. Egyptian mummies were wrapped in linen as a symbol of light and purity, and as a display of wealth. In 1923, the German city Bielefeld issued banknotes printed on linen. Painters have used linen fabric as one of the preferred traditional supports for oil painting, which is true until today. In the past, linen was also used for books and extensively by artisan bakers. Known as a couche, the flax cloth was used to hold the dough into shape while in the final rise, just before baking.

The word "linen" has given rise to a number of other terms. For example the world line is derived from the use of a linen thread to determine a straight line. Lining, because linen was often used to create an inner layer for wool and leather clothing. Lingerie, via French, originally denotes underwear made of linen. And even Linoleum, a floor covering made from linseed oil and other materials.

What is the difference between flax and linen?

Linen is a textile made from hairs of the flax plant fibers that grow inside of the stalks of the Linum usitatissimum, one of the oldest cultivated plants in human history. Flax is an annual plant, which means it only lives for one growing season. The plant adapts easily to its environment. It is not known whether the earliest use of flax was for its valuable oil-bearing seeds (linseed) or its woody stems for textile production.

Linen is a bast fiber. Flax fibers vary in length: shorter tow fibers used for coarser fabrics and longer line fibers used for finer fabrics. At My Sleeping Gypsy we use the finest long line fibers, but since they underwent little processing you can sometimes see the famous linen ‘’nodes’’ - small, soft, irregular lumps, which occur randomly along the length of the fabric. Slubs do not compromise the integrity of the fabric, and therefore they are not viewed as a defect. Moreover they are considered as part of the aesthetic appeal of an expensive natural product.

Why linen is so durable?

Linen is thicker than cotton and long linen fibers contribute to strength, which contributes to longevity. The cross-section of the linen fiber is made up of irregular polygonal shapes which contribute to the coarse texture of the fabric. At My Sleeping Gypsy we use linen fabrics as they last a very long time, which makes linen garments live in your wardrobe forever. How do we know? Because we have inherited our linen dresses from our great grand mother's and these dresses are in a great condition today.

Why linen is often worn in summer?

The main benefit of wearing linen clothes in hot weather is the coolness they provide. We love the way linens are breathable. Clothes made of linen possess high air permeability, which allows air to flow through the fabric easily and allows the body to breathe. Linen fabric feels cool to touch, a phenomenon which indicates its higher conductivity (the same principle that makes metals feel "cold"). It is claimed, that heat conductivity of linen is five times higher than wool and eighteen times higher than silk.

Why linen is considered to be a sustainable material?

Flax thrives in temperate climates and is a resilient plant, requiring few fertilisers or pesticides to grow. Flax is relatively easy to grow organically because the plant adapts easily to its environment. Linen fibers can be processed without the use of chemicals. Conciouse linen productions produce Zero waste. The waste that will not go into fabric manufacture, will be put towards other uses, such as linenseed oil. Flax is water efficient in production. Usual rainfall is enough to irrigate European cultivations of flax, unlike cotton which can require high volumes of water depending on where it is grown. Here is a simplified illustration of the water efficiency concept: If all French people tomorrow bought a linen shirt instead of a cotton one, it would save the equivalent of all Paris’s drinking water for a year.

Where My Sleeping Gypsy linen comes from?

We use linens as it is our local material. Flax is grown in many parts of the world, but top quality flax is primarily grown in Western European countries and Ukraine. For My Sleeping Gypsy garments we use our local linens that require minimum transportation which we are very proud of.

How to take care of My Sleeping Gypsy linen garment?

Linen is relatively easy to take care of, since it resists dirt and stains, has no lint or pilling tendency, and can be dry-cleaned, machine-washed, or steamed. It can withstand high temperatures, and has only moderate initial shrinkage. It is smooth, making the finished fabric lint-free, and gets softer the more it is washed. Linen should not be dried too much by tumble drying, and it is much easier to iron when damp. Linen wrinkles very easily, and thus some more formal garments require ironing often, in order to maintain perfect smoothness. Nevertheless, the tendency to wrinkle is often considered part of linen's particular "charm", and many modern linen garments are designed to be air-dried on a good clothes hanger and worn without the necessity of ironing. If you own a Vyshyvanka from My Sleeping Gypsy, during your travels when you dont have an access to an iron you can simply put the dress on a hanger and leave it in the bathroom or any humid environment. In the morning the dress will be ready to wear without any need of special care.

How is linen fabric made?

Traditionally, the process of cultivating flax and processing it into linen yarn and then fabric, involved many members of a family. To generate the longest possible fibers, flax is either hand-harvested by pulling up the entire plant or stalks are cut very close to the root. After harvesting, the plants are dried, and the seeds are removed through a mechanized process called “rippling” (threshing) and winnowing. We will do a separate blog post on the linen manufacturing in our homeland. Meanwhile you can get more information about linen here www.europeanflax.com

Product featured in this article