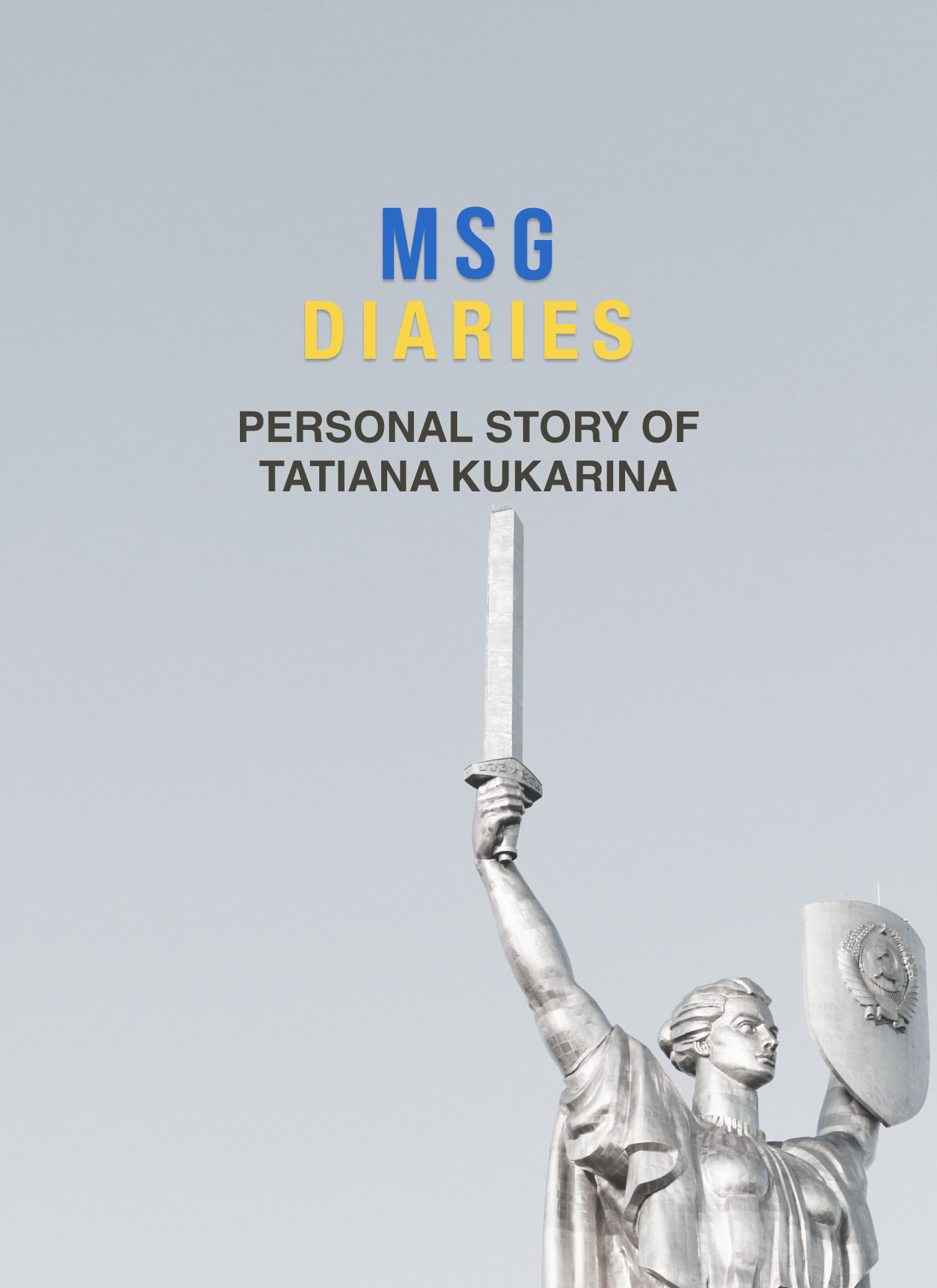 On the evening of February 23, I was looking for tickets to Istanbul and had a long talk with my mother about what to do in case of a war. My mum woke me up at 5.30 am on February 24 with the words: “Tanya, wake up! Russia invaded Ukraine, they started to bomb our cities. Hurry up! We need to go to a shelter downstairs.” I have never imagined that I may hear such words in my life and thought it was a bad dream. Then I got a call from my friend with a voice full of fear, she was crying and said that Russia started the war against us. She was already dressed up with her daughter and they did not know where to go to find a shelter. Then I heard the sound of an air raid siren and realized that it was in real life, we must dress up quickly and get out of the apartment. Us - my daughter, mum, and I - took our bags with documents, necessary clothes, blankets, food, water that we prepared in advance and went down to the parking lot in our house building that turned into a shelter for neighbors. There were many people with kids and the elderly, people sitting on their bags or in the cold basement. I wanted to leave Kyiv on the first day of the war but my mum said she stays in our apartment with my dad because he is a blind and almost disabled person. It would be d/ifficult to flee with him. I didn't want to leave my parents under the rocket bombing and air raid sirens every hour. We spent the first day and night at the shelter - mum and I were sleeping in the chairs, my daughter slept in the suitcase, dad stayed at home on the 10th floor. It was very cold in the parking lot like we were sleeping on the street.

We spent 4 days in the shelter without internet and heating coming back home for 30-40 mins during the day to eat warm food, change clothes, fill up our bottles of warm water and rest till the next air raid siren. Every day I tried my best to persuade mum to leave the city and get to Poland. On the fifth day, March 1, I decided to flee with my daughter, my friend with her son to Poland by train. We packed our bags very quickly. My friend with a car got us to Kyiv Railway Station and wanted to take a direct train from Kyiv to Warsaw. It was already the evening. There were a lot of people at the Railway Station sitting and lying on the floor, on bags and waiting for the trains. There was no light, just in the big hall with the online schedule. There was a huge crowd of people in the station hall and they all stared at the online schedule waiting for the number of the track to which must have arrived a train, Kyiv-Warsaw. When the number appeared, the crowd went crazy and people started to run away to search for this track. That was like in the movies about the war. We were in the middle of the crowd with bags and kids. When we got out of the station, there was no light, people were running around in the dark asking where to go, nobody replied, nobody knew where to go. The air raid siren started to sound. We heard the sounds of gunfire somewhere nearby. When we got to the place where this track should be, the gate was closed and there were armed people preventing the crowd from getting on the train. Later somebody said that the train was already occupied with wounded soldiers who were going to be transported to Warsaw. On the neighboring track, there was a train to Rivne city which is located in Western Ukraine. There were available seats in the railway wagon and we went on board. The conductor that was passing by said that the train will go without stops and when the light turned off and asked not to use a phone flashlight due to security reasons. We were sitting in the dark train for about 40 minutes waiting for departure. To the left of our wagon somewhere very close to the station, right in the city, a loud explosion erupted and a huge red cloud appeared. And the train departed. The way took us about 8,5 hours to Rivne. On the way, we saw explosion lights on the horizon.

My friend asked her friends in Rivne to find accommodation for us in the city. One guy shared with me a link to a website where I found another man who provided us with a new 1 bedroom apartment in a good area of the city and picked us up from the railway station. Volunteers met us at the station and offered tea, coffee, hamburgers, and snack packages. For those who need help with accommodation in Rivne and organize buses to Yagodin city on the Polish border on the next day. We rested for one night at the apartment and the next day went to Yagodin by bus. The journey took 3,5 hours. We arrived directly at the border point and were in the first row of the crowd ahead of a huge queue of cars. Then, as a group of about 50 women with children, we walked across the Ukrainian border, reached the Polish border post, and waited in line for passport control. Polish volunteers stood there with food and hot drinks and greeted people very warmly. We passed passport control quite fast, the whole process took about 2,5 hours. My friend’s husband met us right at the passport control with a car. He came from Canada to Krakow, rented a car, and drove to the Polish border to meet us. Then we drove to Warsaw and stayed at the hotel for one night. The next day we moved to a 2 bedroom apartment in the Piasecny suburb near Warsaw which my other friend who lives in Warsaw provided. We lived there for 4 days but the internet connection was very bad most of the time. Then my daughter and I moved to the house of a young Polish couple with two kids where they provided us with a cozy room. Now we are searching for a separate apartment or a bigger room with a bathroom and kitchen in another European country and will apply for all necessary documents for temporary protection status.

Support our brand and our not for profit initiative “MSGsupports”